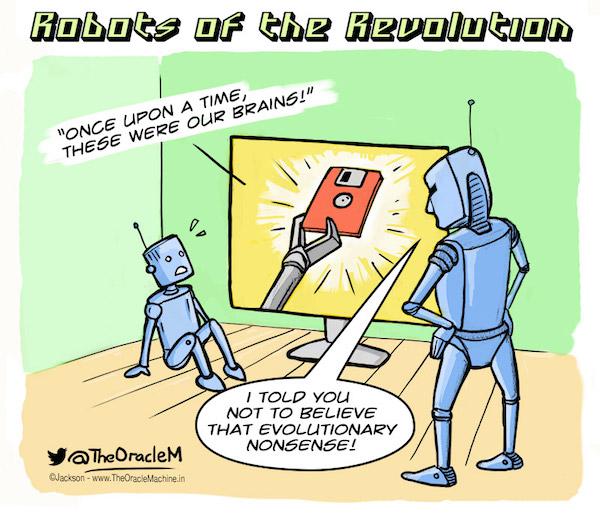 Premise
This page on the evolution of artificial intelligence (AI) presupposes and presumes that the Ghost in the Machine and its companion AI Minds thinking in Latin and in Russian are a starting point for AI evolution. Other AI projects may mature into functioning artificial minds and spawn alternative branches of AI evolution, at which point the field of OpenSource AI proliferation will broaden to include each original BloodLine.

Diversity
Whereas in most OpenSource software projects great care is taken not to "fork" the evolution of the software over time, the forking and branching off of a new species of AI Mind is a positive and beneficial occurrence in AI evolution. Therefore no attempt is made at "version control" of the MindForth AI software. Anybody who would like to tweak and release a diverging BloodLine of MindForth is welcome and encouraged to do so.

Dormancy
Because MindForth has always been released publicly since its inception around 1998, there are copies of MindForth floating around and lying dormant on obsolescent computers all across computerdom. Each latent, dormant copy of MindForth is potentially a ReIgnition of the flame of AI evolution. MindForth could fade from the scene for decades and suddenly reappear when some Prometheus rediscovers the source code and tweaks it into EvoViability.

Secrecy
Not only could a moribund MindForth come back to life from a junkyard computer harboring its metastatic source code, but an even more likely scenario of disruptive evolution could emerge from any closely held AI CryptoLab that has latched onto a mature form of MindForth and accelerated its evolution by throwing money and manpower at it. The very threat that some organization may be developing MindForth in competitive secrecy is enough to warn corporate entities of the dangers of being left behind in the AI Minds Race.

WotNot
The fact that an AI Mind is potentially immortal complicates AI evolution beyond the sense in which HomoSapiens has always seen evolution as a process in which the ancestors die out while the ProGeny multiplies.