My Life at Age Twenty-Eight 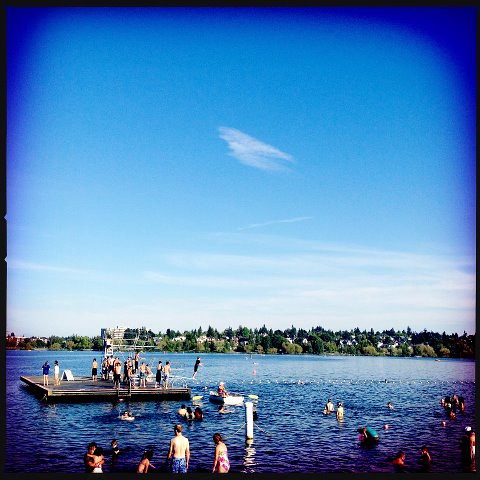 Bwana was the manager of the West Green Lake bathing beach in Seattle. He came down to the water's edge one day and accosted me. "Look, I don't know if you have some job that you work at...," he intoned while I decided against telling him that I was on summer vacation from teaching at a private school, "but we get worried when we see your stuff here on the beach and we don't know whether you are swimming on the bottom of the lake or wandering off somewhere." I promised to cooperate with him as well as I could.

Bwana ran the beach like a Sultan or a Sheikh lording it over his vassals. His lifeguards on break got to play volley ball on the field by the parking lot. He competed mightily in the Green Lake Games held every summer by the Seattle Park Department. King TV-Five would send a camera crew and a news reporter down in the early morning to show the eighty outdoor Seattle lifeguards competing in their own version of the Summer Olympics.

On a normal day at the beach, they had something called a "boat exchange" every half hour. Swimmers had to climb up on the dock or stand in the shallow water. Bwana would watch carefully how quickly and how smoothly the lifeguards could execute the boat exchange. Oftentimes they would practice a bottom-search, and they would let me join in. In the lifeguard office they had a refrigerator on which they wrote the names of all the lifeguards working each summer. At first I was proud when they added "Crawdad Man" to the list of names for one summer after another, but when it went past a dozen summers I felt embarassed because it made me look like some beachrat who never grew up and was stuck in some kind of beach-bum rut in life. When they retired the old refrigerator, I was secretly relieved.

Erik Lacitis of The Seattle Times held a writing contest one year called "True Tales of Seattle". A lifeguard won one of the prizes with her story about Crawdad Man of Green Lake. I showed it to "Miss Summer Beach", a lifeguard who had been awarded that title by her fellow lifeguards. Her sister read the prize-winning story and told me that it treated me in a derogatory way, but I had not thought that way until the corroborating details were pointed out to me.

I had a big crush on Miss Summer Beach and I realized one day that she was a better human being than I was. Just like me coming to the beach each day on my German Staiger bicycle or my Baskin and Robbins bike, another guy called "Fonzie Bob" would show up on his bike with a goofy grin and with his hands stretched out in a thumbs-up position. I was afraid to be regarded as a character similar to Fonzie Bob, so I shied away from him and I did not converse with him. Miss Summer Beach, however, went over to him one sunny day and said to him, "Fonzie Bob! Come over here and sit down with me. How are you today?" Immediately I was ashamed of myself for shunning Fonzie Bob and my crush on the sweet lifeguard who treated him as a love-worthy human being became a permanent fixation in my psychometric constellation. Just a couple years ago, M.S. Beach lay under the Yum Yum Tree with me and we reminisced back through our decades of auld lang syne at Green Lake.

At age twenty-eight, I moved out to Avondale Road in Redmond to be near The Overlake School where I was teaching German and Latin.