My Life at Age Twenty-Four 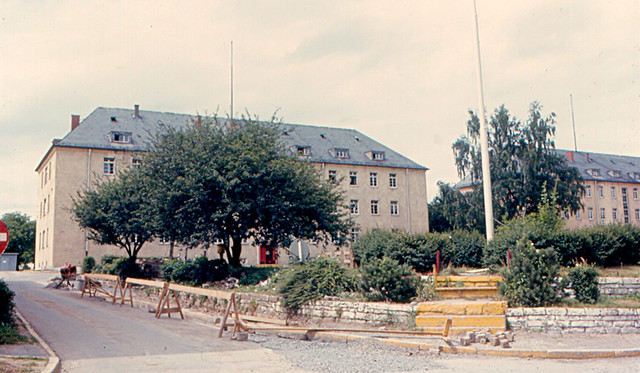 
There I was in the U.S. Army at the Badenerhof Kaserne in Heilbronn am Neckar, West Germany. The Army sent me on temporary duty (TDY) to Augsburg near Munich. I went out shopping to send a birthday present to Second Love in Seattle, and I bought her a pair of fancy sewing scissors from Solingen, Germany. But while birthday-shopping for her, I found and bought for myself an expensive, albeit used, Minox spy camera.

When I was on TDY in Augsburg I had a lot of free time on my hands and I took a few trips on the train. I went to Ulm to meet Detlef Stark and his parents. Detlef and I then took a train to Munich, where he had spent a lot of time studying the Nazi era at the Institut fuer Zeitgeschichte. Detlef took me on a tour of all the Nazi points of interest in Munich. He showed me the building and the external windows of the room where Schicklgruber (another name for Hitler) had joined the National-Sozialistische Deutsche Arbeiter-Partei or "NSDAP", becoming somewhere around its ninth member. We walked through a courtyard where Kunstmaler Hitler had painted an Erker or part of a building jutting out above the courtyard. Detlef took me to the Feldherrnhalle which is kind of like the Lincoln Memorial of Germany, except it is where Hitler staged his failed Putsch against the government of Bavaria. Detlef Fritz explained to me that citizens were required to give the Nazi salute when they passed by the guards and the plaque commemorating those fallen in the Putsch, or they were subject to arrest. Detlef pointed out to me the little alley-way that citizens could duck through if they wanted to avoid saluting the fallen Nazis. He took me to the big government building where the Munich Pact of appeasement had been signed by the Nazis and the British Prime Minister Neville Chamberlain, who flew back to England waving a piece of paper and bragging about "peace in our time".

From Augsburg one day I wanted to take a train to Munich by myself. Among a crowd of people on the platform at the Bahnhof, I noticed a pretty German girl reading a book in English. Suddenly a voice came over the loudspeakers announcing in German that the train planned for departure from that platform had been switched to a different platform. Like extras in a movie, all the travelers except me and das Maedchen went instantly into motion and scurried down the steps to go to the newly designated platform. She and I were left alone to begin our adventure together. I asked her if she spoke English, and yes, she did, because she was on her way home to Landsberg am Lech from a one-year stay in London as an au pair, French for "attached to a couple", typically a man and wife with offspring in need of a nanny. At our nothing-can-be-done leisure, we made our way to the new platform, feeling as if Schicksal or Kismet or Fate had driven off all the other people and left us alone together. We sat facing each other and exchanging stories all the way from Augsburg to Munich, where I took her picture with my Minox spy camera and she gave me her mailing address. From back in Heilbronn I mailed her a letter and a print of her photograph. She wrote a letter back to me, and that's all she wrote.

In Munich I went to a bookstore near the university and I bought an old copy of Mein Kampf in German. Except for the first few chapters, it was very boring to read and I hated the Fraktur font in which it was printed. When I later worked at a bookstore in Seattle, the owner's husband, Dr. Mansour Samadpour, let me put my copy of Mein Kampf on display in the front window with a $500.00 price-tag designed to be so high that no one would actually buy the book. Some customers got very upset about seeing a book by Hitler in the front window. Mansour laughed it off, because he knew that selling a book of historic importance was not the same as endorsing the book.

When I was working at the same bookstore in the Wallingford neighborhood of Seattle, one evening a young student-type came in and I detected a slight accent in his speech, so I said, "Sind Sie Deutscher?" for "Are you German?" That first question surprised him only a little, so he simply answered yes. I did some quick thinking, and it occurred to me that a young German student might be in Seattle to visit the Institute for Nuclear Theory on the UW campus, where I had helped Third Love get a job as a program coordinator, so then I fired the heavy artillery and I said, "Sind Sie Physiker?" or, "Are you a physicist?" With a look of absolute shock and amazement on his face, he admitted that he was indeed a physicist visiting the institute, and the next night he came back with four other physicists who talked German with me.