My Life at Age Nineteen 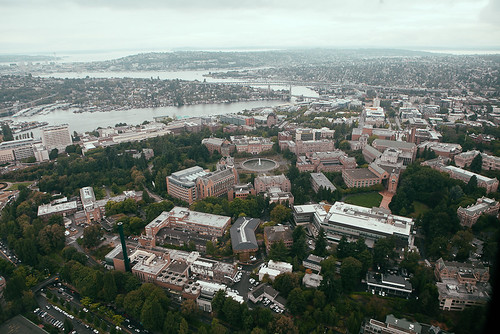 Aerial view of the University of Washington in 2013 from Flickr

As a sophomore at the University of Washington I began my lifelong project in artificial intelligence (AI). In downtown Seattle I bought electric relays to experiment with, making circuits of artificial life (alife).

In the Winter Quarter of my sophomore year I went through some kind of intellectual awakening. I had really settled in at college and the first year of my lifelong AI project was going full steam ahead.

One day my friend Mikhail and I tried to go and visit our mutual friend whose codename was Dmitri von Hagen. At his house we were told that he had flown away on Icelandic Airlines to Germany. Soon I began receiving letters from Dmitri in Germany. When he arrived back in Seattle the next June, he had become so fluent in German that I was overcome with envy. He needed a place to stay near the university for Summer Quarter, and my friend Darmgut (instantaneous codename created right here) had had a tiff with his family, so I helped both of them find a cheap room together in the University District. They went on food stamps and got large quantities of peanut butter. But first, during Spring Quarter, the Hippy Craze hit Seattle.

Between Denny Hall and the edge of campus on 15th Avenue Northeast, there was a little slope of grass where you would often see a gathering of the "fringies", as they were called at first by the UW Daily, the student newspaper of the University of Washington. These young people were living on the "fringe" of the campus and on the "fringe" of society. They were actually part of a nation-wide phenomenon that was sweeping the country. They were called "fringies" for lack of a better word during only one college quarter. Afterwards (afterwords?) they were called Hippies as the local student newspaper got in step with the national newspeak.

When summer came, Hippies were everywhere -- in the University District, on the buses of Seattle Transit, on TV, in all the media, and in the growing anti-war movement. The boys had long hair like the Beatles, and their favorite symbol was the peace symbol ☮. The Magus bookstore in the University District sold buttons which you could wear with slogans like "War is good busness -- invest your son." Another button said something like, "Join the Army, travel the world, meet friendly citizens of foreign countries and kill them." Half a block down University Way (also called "the Ave") from the Magus bookstore was the Eigerwand coffee house, which was like the Hippy Central of the U District. I had not yet met Second Love who made me start drinking coffee, so I would only go inside the dark Eigerwand for a brief look-see and then I would plant my derriere on the concrete wall of a parking lot adjoining the Eigerwand. A frat boy came by and said, "Wouldn't it be funny if you fell down?" Since I also called myself "T.H.E. Cat" or "Catman" to my friend Aardvark and his crowd, I knew that I would land like a cat if I slipped off the concrete wall. A few years later, the property-owners built an iron gridwork to keep undesirables like me off the concrete wall.

At the Eigerwand, there was one long-haired hippy who looked like the spitting image of popular portrayals of Jesus Christ. When the Seattle police eventually arrested him on some charge unknown to me, they were reported as saying, "We finally got Jesus." It may have been reported in "The Helix," which was the underground newspaper in Seattle, like the "Berkeley Barb" in California. The great local historian Walt Crowley was perhaps a founder of The Helix.

On the first of May in that year when I was nineteen, I went with (codename) Bruce Wayne on a bus that Sunday to the Westlake Mall in downtown Seattle. The leader of the American Nazi Party, George (not Orwell...what was his name?) had come to town in a traveling camper with his stormtroopers wearing swastikas and was scheduled to give a speech. Bruce Wayne had his 16-millimeter film camera with him, and the plan was to film the speech of George Rockwell -- that was his name. Rockwell had been interviewed in maybe Playboy, and was now a famous political personage.

At the then delta-shaped Westlake Mall, a crowd had gathered and George Lincoln Rockwell was standing on top of his mobile camper, with storm-troopers on each side of him. As Rockwell ranted and raved, suddenly there was a wild man with a Viet Cong flag on a wooden pole in front of Rockwell, raising up the flag and taunting Rockwell with it. Rockwell started spewing invective down at the "mealy-mouthed peace creep," as Rockwell formulated the lone individual daring to opppose him. The peace creep was becoming ever more agitated, going round and round in a circle and raising the Viet Cong flag up towards Rockwell during each iteration. Suddenly two or three guys who looked like construction workers grabbed hold of the peace creep and tried to take his Viet Cong flag away from him. I was standing right there, and I did not like seeing the assault on the peace creep, so I tried to pull one assailant off the peace creep. The melee made the evening TV news, and on the following Monday morning, my Greek instructor, Prof. Thomas G. Rosenmeyer, a refugee from Nazi Germany, interrupted the Greek class to address me personally and ask me if it was I whom he had seen on TV the night before. I had to admit that it was, and i was hoping that Professor Rosenmeyer was not thinking that I was any kind of Nazi. Peace creep, yes, Nazi, no.

After I pulled one of the pro-war thugs off the peace creep at the Westlake Mall, the anti-war activist quickly ran off and entered an alley near Second or Third Avenue. I went running after him, because I wanted to talk with him. When I caught up with him and asked him who he was, he said he was a Doukhobor -- Духобор -- Russian for a "fighter of the spirit." He told me about the Doukhobors up in British Columbia, who had escaped from Russia when the Communists took over, and who were often engaged in social protest in the Canadian province of British Columbia. He bragged to me that the Doukhobors would take ther clothes off en masse if anyone tried to interfere with one of their protests. A few weeks or months later, he recognized me on a street corner in downtown Seattle, and I responded to him by saying "Doukhobor!" His real name was Floyd Turner, and in later years he ran a business called "Floyd's Flower Trip," for which girls on street corners held plastic buckets full of flowers being offered for sale to the drivers of cars stopping at an intersection. When the University District Street Fair started up a few years later, Floyd Turner had a one-man booth in which he stood barefoot on a block of ice and gave out pamphlets describing how he had climbed Mount Rainier barefoot. Many years later, when I met the historian Walt Crowley at a protest against the invasion of Iraq, I told Walt Crowley that Floyd Turner felt that he was not getting enough credit in Crowley's book about the Sixties in Seattle. "Don't we all?" answered Walt Crowley. A few years later I was dismayed to learn that Walt Crowley, chief personage behind Northwest History Link, had died rather young. I had been looking forward to having future conversations with Walt Crowley over the years. I did have future conversations with the Doukhobor -- Floyd Turner -- because he became an habitue for several years at the Continental Greek Cafe on University Way, one or two doors down from Costa's Greek restaurant.