My Life at Age Eight 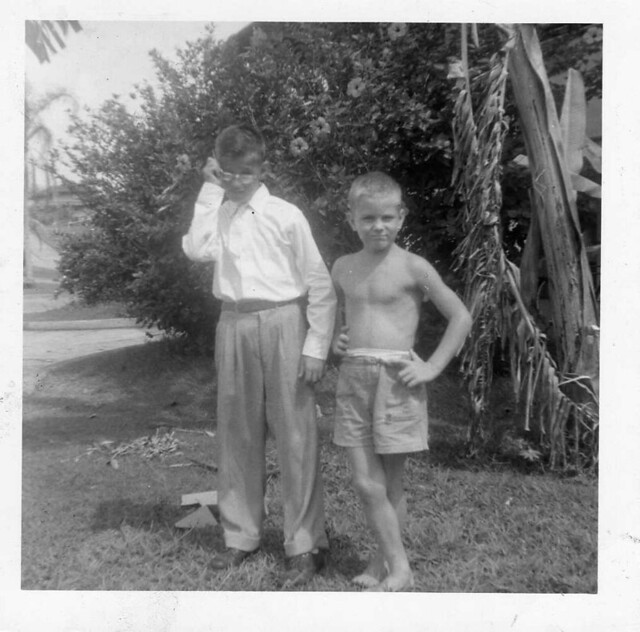 Mentifex standing between his older brother Larry and a banana tree in Panama.


I found an olive-drab electric army battery near the B.O.Q. (Bachelor Officers Quarters) at Fort Gulick and my life-long interest in electric and electronic devices began.

On two or three occasions when I was about eight years old in Panama, I had horrifying nightmares that made me wake up weeping and crying inconsolably. It was a dream that felt like some alien force was fighting with me for control of my mind. If I tried with all my will, I could force the area occupied by the alien invader to shrink in comparison with my own share of the psyche. But if I relaxed or tried to disengage from the battle royal, the other side grew larger and larger and threatened to overwhelm me or engulf me. At the same time, I think some kind of fast-tempo music like Danse Macabre was playing, heightening the agitation and the terror of the nightmare. Many years later, I found out that there was such a thing as a , and I had experienced it in Panama, but not after Panama. I think that, when I fell asleep again after the first one, it started right up again, as if some evil spirit was waiting for me to lose consciousness and lose my mind. So there may have been two episodes on the first night, and one more episode a few weeks or months later. They never occurred again, perhaps because my mind had been taken over by alien forces and there was no further need to terrorize me.

Shards of pottery; School of the Americas

At some point when I was seven or eight years old in Panama, I found an ostrakon or "shard" of pottery on the trail leading down to Gatun Lake from my normal entry-point into the jungle from Quarters 32. It was not possible for me to just walk into the jungle, because I always went barefoot in shorts and the jungle was limned or "edged" with a barrier of flesh-cutting grass to a height of twenty or thirty inches. Although I tried at first to walk carefully through the grass that always made my bare legs bleed, I soon gave up and for the duration of my father's tour of duty at Fort Gulick I would always jump over the devil-grass to enter the jungle. Out in the lawn that stretched from our Quarters 32 up a little hill and over towards Building 400 which housed not only our dentist but also La Escuela de las Americas, or the infamous and notorious "School of the Americas", there was a large, oval patch of low vegetation merging with the grass and consisting of some kind of carnivorous plant with inch-long leaves that snapped shut when disturbed. Apparently any insect that landed on the leaf would suddenly be trapped and digested by the leaf snapping shut. For me it was fun to trudge through the oval area in my bare feet and watch the grass change color as the leaves snapped shut.

One day we kids were going to the dentist and waiting for the elevator in Building 400. Suddenly the door opened and I was terrified to be faced with two Latino soldiers in uniform and holding submachine guns in the "Present arms!" position right in front of us. Somehow we still made it upstairs to the dentist. However, the School of the Americas became very controversial in later years, because anti-war activists claimed that the American Army was using the school to teach Latin-American dictatorships how to oppress and murder their own citizens. The school eventually changed its name and moved to an American Army fort, possibly Fort Benning, on the East Coast of the USA. One of my favorite teachers at Blanchet High School in Seattle, Sister Miriam, went on a personal crusade against the horrors of The School of the Americas and she would travel with other protestors to the stateside location of the school and illegally enter its boundary in order to get herself arrested and to draw attention to the U.S. support of military dictatorships. I would read about her quite often in the newspapers staging these personal protests, but I had no way to get in touch with her and tell her that I had had personal experience with La Escuela de las Americas when I was an army brat in Panama. I was fully sympathetic to Sister Miriam's cause, because I have done my own fair share of protesting against evildoing by the U.S. government. As I write these memoires, I am personally involved in a protest against having the headquarters of the U.S. Fifth Fleet in the nightmarishly inhumane dictatorship of Bahrain. If we Americans stand for freedom and democracy, how can we base our Fifth Fleet in a country where a tiny minority ruthlessly rules a suffering majority with the help of that blasphemy against Allah, Saudi Arabia?

The international community should ostracize the Saudi government that likes to murder and dismember a truth-telling journalist. In ancient Greece, if people in the city of Athens wanted to get rid of a troublemaker, banning him was put to a vote in the form of an urn in which citizens were supposed to write the name of the unfortunate citizen on a shard of pottery, that is, an "ostrakon" like I found one day in the jungle, which is where the verb "to ostracize" comes from. Soon I was finding more and more of these shards of pottery, perhaps left over from the Incan or Mayan civilization of Central America. I made a collection of the shards of pottery on a table-top in the bedroom that I shared with my older brother Larry. I had no idea how old the shards of pottery were, or who had made them, or what the objects of pottery had been used for. But there I was, an amateur archeologist in the jungle of Panama, and a future protestor for truth, justice and the better-than-American way.