My Life at Age Three 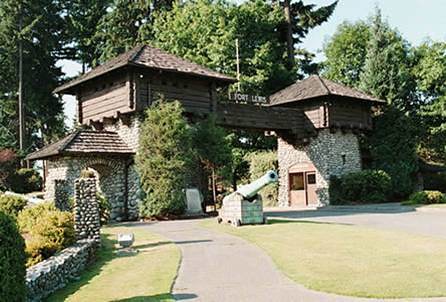 
My family lived by Fort Lewis at the Mount Rainier Ordnance Depot for three years when I was three, four and five. My older brother and I had the usual childhood diseases, like mumps and chicken pox. I was exploring the world outside. We often drove up Highway 99 to Seattle, where we visited my four grandparents. My maternal grandmorther, Anna Yagle, who lived to be 101, often spoke Czech with her sister Barbara, who lived to be 102, but spent her last twenty years not recognizing anybody.

Our mother took us children to Catholic Mass with her on Sundays at Fort lewis. It seemed strange to me that there was a lot of kneeling and sitting and standing, and the Mass was conducted in Latin, except for the sermon, which was delivered in English. I noticed that all the people in the church would start mumbling out loud at certain points, moving their lips and making unintelligible noises, so I did it, too. I started mumbling out loud as best I could. Nobody told me that the people were saying specific words of specific prayers. My father did not go to Mass with us. Years later, a family friend told me that my grandfather Edward had kicked my father out of the house for not going to Mass in Seattle. Religious differences between my father and me would eventually cause me to run away from home when I was fourteen.

My father would tell me at age three why grown-ups did certain things, and a lot of the grown-up reasoning seemed illogical to me. I wish that I could remember which aspects of adult behavior I considered to be illogical when I was three, because maybe some things make more sense as you get older.